By Friedrich-Wilhelm Tebbe and Remon Sperr

Friedrich-Wilhelm Tebbe was born on May 31 ,1945 in Rotenburg/Wümme as the son of the theologian Fritz Tebbe and his wife Eva, neé Berger. Very early he was given piano-lessons by Heinz Klein. He had his first musical experiences in his youth as a member of the classical secondary school’s orchestra, amongst others with Bach-cantatas and oratorios. For the first time he heard the Obernkirchen Children’s Choir sing in the Emperor-Friedrich-Hall in Mönchengladbach in 1957.

At the age of 15, Friedrich-Wilhelm Tebbe started organ-lessons with Hanover’s city-organist Gustav Sasse. When he was 18, he had his first appearance as a singer in the school-opera “Die vier Winde” written by Christian Schaper. He sang the chief-part: the miller. This opera was also recorded by the NDR. After qualifying for admission to university in 1966, he studied at the Academy for Music and Theatre in Hanover. His main subjects were vocal music in the opera-class with Otto Köhler and organ with Elinor von der Heyde-Dohrn. From the beginning, his special-field was the relevant parties for lyrical baritone, which he presented successfully on stage in 1970.

In Vienna, Verviers and Kaiserslautern he sang Rossini’s Figaro, also during a common tour with the University Orchestra, as well as the Papageno (from the Mozart-opera “Die Zauberflöte”, The magic flute). From 1969 to 1980 he gave more than 200 concerts as a ballad-singer in Western Europe with his piano-accompanist, bandmaster Gottfried Weiße, who later was to accompany him for five years. On the occasion of a USA-tour through German clubs and shows of the Community Concert Association he got his best review in 1971: “It’s a fate of all baritones to be measured against Dietrich Fischer-Dieskau and Hermann Prey. And if Friedrich-Wilhelm Tebbe passes this comparisons in all honour, that may be a high honour for him.” (John Rockwell NT 1971)

From 1969 on, he studied school-music in addition. After the final examination and an extended one with the aim of a certified singing-teacher for soloists, he studied musical ensemble-management with Felix Prohaska in Hanover, and at the Mainz university with Sergiu Celibidache (1991/92) on his singing-teacher’s advice. He was decisively influenced by the latter. At the same time as he worked as music-teacher at the grammar-school in Stadthagen, he also directed a theatre study group, which achieved nationwide significance. Simultaneously, he led the school-choirs and was cantor in Bergkirchen at St. Katharinen Church from 1977 to 1994. At the same time he set up the Schaumburg Church Choir Bergkirchen together with the upper school-choir of the Stadthagen grammar school and the parents of choristers. With this church-choir he recorded broadcasts and records, and he performed one year’s Bach-cantatas with world-famous soloists, such as Charlotte Lehmann, Hanna Schwarz, Lioba Braun, Theo Altmeyer, Hermann Prey, Gerd Nienstedt and others. He passed an extended examination as band-master at the end of 1980.

On mayor Helmut Preul’s request Friedrich-Wilhelm Tebbe took over the management of the Obernkirchen Children’s Choir in June 1980. Skilfully he re-organized the choir: since there were only six choristers left, he brought along 26 singers of his upper school-choir. 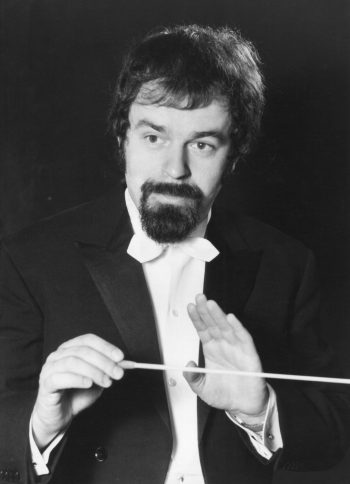 After a very short time the opera “Hänsel und Gretel” (Hansel and Gretel) by Engelbert Humperdinck was rehearsed, as well as a complete Christmas-programme. His first concert with the FOCC took place in the Emperor Friedrich-hall in Mönchengladbach, exactly where 23 years ago he had heard the choir for the first time.

Friedrich-Wilhelm Tebbe recorded a multi-part cassette with the “little ones” of the Obernkirchen Children’s Choir at Miller-International at the beginning of his activity as choir-leader. Records with folksongs sung by the concert-choir followed, as also recordings with Hermann Prey. A compact disc called “Lerchengesang” (Larks’ singing) with choral songs from the Romantic period ensued.

Numerous tours brought Friedrich-Wilhelm Tebbe to European countries and overseas as conductor of the Obernkirchen Children’s Choir. On the invitation of Atsuo Nishi, he spent all together 10 weeks with the choir in 1990 and 1992 as guest in the “Glücks Königreich” (Lucky Kingdom of Hokkaido) Japan.

After 14 years as conductor of the Obernkirchen Children’s Choir he gave his last concert in Freiberg (Saxony).

On January 1st, 1995, Friedrich-Wilhelm Tebbe was summoned to the International University Dannunziana in Italy, where he was inaugurated on March 4 as university professor, and due to his merits in the musical field he received an honorary doctor title.

Up until 2010 he gave lessons in conducting and choral voice formation mainly in Padua.

Already before his activity as choir-leader of the Obernkirchen Children’s Choir he was closely attached to UNICEF and directed many appearances for this organization at home and abroad.

Friedrich-Wilhelm Tebbe passed away in Bad Nenndorf on October 2, 2021.