Denis Halikiopoulos was born on July 15, 1930 in Patras, Greece. His special musicality was recognized quite early, so that he was taught to play the piano in his early days. At the age of 16, he passed his first piano-examination at the music-school of his hometown. College days in Athens followed.

He continued his conduct-studies at the Academy for Music (today a university) under the renowned conduct-lecturer Hans Swarowsky, with fellow-students Zubin Mehta and Claudio Abbado. In 1957 he passed the final examination for bandmasters in Vienna. An extended piano-study was completed under the pianist and répétiteuse Stella Wang. In addition, he took classes in movement and percussion.

Afterwards, Denis Halikiopoulos was examined as opera-conductor at the Academy of Arts in West-Berlin. 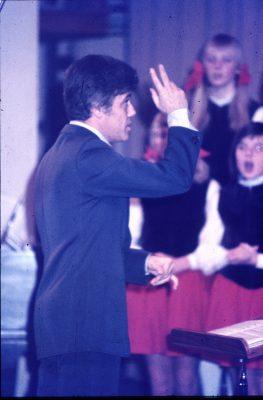 A permanent post at the Detmold Theatre followed. Since 1964 the extended visiting performances of the theatre brought Halikiopoulos often to the Bückeburg town-hall.

He moved to the Osnabrück Municipal Theatre as first bandmaster. There he conducted amongst others the musical “Show-Boat”. Again and again he went to his Greek home as a guest-conductor.

Being employed as a teacher at the music-school in Herford, he helped out as a pianist at short notice in spring of 1975 for several concerts of the Obernkirchen Childrens’s Choir, and in the same year he took over the concert-leadership from Edith Möller, who had fallen ill. When Edith Möller died on July 10, 1975, Denis Halikiopoulos moved from Herford to Bückeburg, took charge of the choir and was appointed director of the “Music-School Schaumburger Märchensänger e.V.”, which had been founded in the same year.

The14th USA-concert-tour, as agreed upon with Columbia Artists Management, was settled for 1976. It was an exacting assignment for Denis Halikiopoulos to tour for three months with about 60 concerts across the United States of America. The short France-tour in spring was easily managed in comparison. The reviews of the 14th professional concert-tour of the Obernkirchen Children’s Choir were very positive, and the tour was a success. Nevertheless the agency terminated the contract with the choir early in 1977.

Denis Halikiopoulos ended his activity for the Obernkirchen Children’s Choir in 1980 and took over the management for the newly established Schaumburger Jugendchor in Bückeburg for one year. In 1981 he moved to the music-school in Bad Salzuflen as director of the special- field piano.