The story of the Obernkirchen Children’s Choir

is exciting and rich in detail. We have divided them into useful sections for better readability.
The previously known discography is then listed.

The short version is suitable for a brief overview:

Abridged version 1948 – today
Detailed representations:
The founding years 1948 – 1950
In professionalism 1951-1954
Busy years 1955 – 1959
On the road around the world 1960 – 1969
Lasting success 1970-1975
The choir has to live on from 1975 to 1980
A newbeginning 1980-1994
1995-1998
1998-2009
2009-2019
Information about the current choir is available on the
music school website at www.maerchensaenger.de
All articles have been created to the best of our knowledge. Documents come from various sources and are evaluated in the “Wicklein Archive”. The archive includes information from public archives and publishers, interviews with contemporary witnesses, photos, newspaper articles, concert programs, letters, diaries and documented reports.
We look forward to additions or corrections and ask all former members of the Schaumburg Fairy Tale Singers for further material. Contributions are always welcome.

The film “The Happy Wanderer”, shot by the Berolina Film Studios in 1955, has been digitized and published on DVD in the “Jewels of Film History” series.
There is also said to be an English version of this film.
Where ? Is not known. 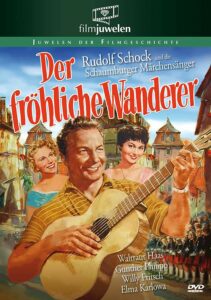 In addition to the choir history, the biographies of the choir directors and important personalities can also be found here.

From the first phase of the choir:

Unlinked topics are still waiting for their author.

These photo links show the variety of sound carriers produced. From the first phase of the choir under Edith Möller:

Between 1953 and 1955, 20-30 shellac records (78rpm) were released by Parlophone, Angles Records, Odeon, Decca, Electrola.
From 1956 about 30 different singles (mostly new editions) were added, which at the time were only available in paper bags without a cover. These are not listed here.

From the phases of the choir as part of the music school Schaumburger Märchensänger e.V.
(mainly under Friedrich Wilhelm Tebbe):

MCs – music cassettes
CDs – compact discs
Part 1 and Part 2
(Part 2 under Kai-Uwe Jirka and Volker Arendts)
In addition, well over 100 LPs and CDs were archived, Samples (compilations) with other artists. These are also not listed here.
nach oben